Posted on February 13, 2016 by bernsisthebastard 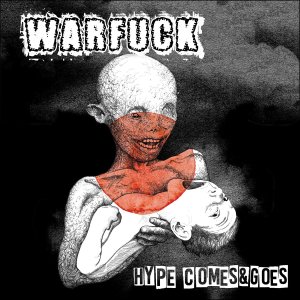 Amidst the bullshit and the trends that have hit various genres of music I hold dear, there will always be a handful of bands who carry their D.I.Y. ethic and stay true to themselves in the true spirit of their extreme music representation. Beyond the hype, beyond the trends and most certainly the popularity contest that I have watched unfold in recent
years.

One such band is Warfuck, grindcore maniacs from Lyon, France, who recently released Hype Comes & Goes, which is the perfect summary of what I mentioned previously. I’m happy to report that it is an absolute banger of a release, which encompasses everything you’d want from a grindcore release, with a few surprises. The record rip-roars into life at the speed of light with some incredible riffs and some might fine drumming to help drive the malice and intent. It also has its own way of blindsiding you with what can only be described as a breakdown with death metal/powerviolence like rhythms, which just speaks to the songwriting and variety embedded within structures.

The record is short, sweet and incredibly fast with some ripping rhythms and
breakdowns. It lends itself a lot to the 90’s death metal style rhythms and more modern powerviolence rhythmic sections that are incorporated into record’s predominantly deathgrind style. This seamless integration really does put this record a peg above your average grindcore record as it is executed effortlessly.

The final product makes it unique and gives the overall soundscape that is undeniably that of Warfuck. I would highly recommend you support and get your grind on. You can find all their music, which is free, including Hype Comes & Goes here.