Posted on June 13, 2016 by bernsisthebastard

There’s a lot of wank out there these days and I find it increasingly difficult to find bands I actually like since every extreme music sub-genre has become a cesspool of mediocrity and triteness.  Luckily, there are these mad Aussie cunts who make some incredible death metal. Based in Melbourne Australia, Sewercide has been around since 2011, doing a few splits and an EP that made a significant impact and I was fortunate enough to get hold of some of these splits from the band themselves. 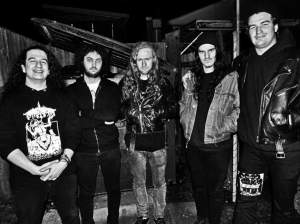 They released an EP in 2015 titled Severing the Mortal Cord, which married death metal and thrash in an ungodly union that just annihilated eardrums, severed heads, and melted faces. A taste of what was to come?  Well, yes sure, so obviously I’ve been keeping my ear to the ground for a full-length, and 2016 is what dreams, or rather nightmares are made of.

Sewercide released their debut full-length titled “Immortalized In Suffering” through Unspeakable Axe Records and damn have they done a fine job! First impressions were that this was going to be a savage release that focused more on the old school death metal sound, without getting rid of the thrashy elements within the compositions. The first few listens were needed to just get my head around the absolute savagery and malevolence that was coming at me like artillery fire.  Incredible riffs, savage as fuck drumming with some ripping bass lines and incredible vocals.

When I started to deconstruct the various tracks with more detail, only then did I start to pick up on the subtleties that make Immortalized In Suffering an instant classic in my opinion. The variations and rhythms malformed into one disgusting piece of art that takes you on a journey from start to finish. The musical composition of each track is unique and doesn’t have so much going on that you can’t follow nor does it become one dimensional at any point. The final product is a brilliant death metal album that just crushes everything in its path. A true testament to what more modern death metal is supposed to be.

They’re currently on tour in the United States, so look them up and go and support some killer death metal!